The light that radiates from Arunachala is so great that even Godess Parvati took refuge here to free herself from the consequences of an act unwittingly done by her. Goddess Parvati came to the banks of river Kampa in Kancheepuram, made a small Linga with the soil and started performing Tapas. She then heard a divine voice from above: “Your Tapas is fulfilled. The Linga you have worshiped has high sanctity. Leave this sacred Linga here so that the devotees here can worship. I have my abode at the sacred hill, where I reside as Arunachala, the name that drives off all sins, come there and be united in Me.” At Tiruvannamalai, the abode of Arunachala, Parvati met the sage Gautamar who said: “Oh Devi, you are the embodiment of knowledge, you know know the supreme power, Siva, who is part of you. But still you find pleasure in hearing the glories of the Lord. However, it is my privilege to describe the infinite divine qualities of Arunachala to you. “This is a unique mountain”, sage Gautama continued: “It has existed from time immemorial, in different stages and in different ages, from Krita, Tretha, Dwapara and Kali Yuga. Sacred rivers pass through this area, visibly and invisibly, like the Indira Teertham, Brahma Teertham, (east), Yama and Nairudha Teertham (south), Varuna and Vayu Teertham (west), Soma and Eesana Teertham (north). It is the confluence of all holy rivers. Nowhere else, one can find the mountain itself in the form of a Linga as in Arunatri,” said sage Gautama.

It was here, the abode of Arunachala, Arunagirinathar was born. The word “Aruna’ means the brilliant rays that come before the advent of the sun. In fact, ‘Aruna’ is the charioteer of the Lord Sun. “Aruna’ is the ‘early dawn’, the beautiful brilliant glow that heralds the dawn of morning when the sun has not yet risen above the horizon. Aruna comes first and then emerges the sun. The darkness of the night gets dispelled with the advent of the light. While Aruna symbolizes the brilliant rays of knowledge, the word ‘Giri’ implies the abode of Lord Siva, the eternal reality, still and un-moving. Thus, Arunagirinathar symbolizes the knowledge absolute, the one who was beyond knowledge and ignorance, beyond day and night and beyond deep sleep and waking.

Arunagirinathar has done around 20 songs at Thiru Arunai”. “Oh! Arunachala, I yearn for that day when I would imbibe the nectar that flows from the ocean of your grace,” he says in his song “Jaya Jaya Aruna”. “Oh Lord, while the Lord of Death comes to take me away and while my dear and near ones sit around me and shed their tears, come, mounted on your peacock and liberate me from the cycle of repeated life and death,” says Arunagirinathar in another song done at Thiru Arunai (Kayalvizhithennai). Devotees believe that mere thought of Arunachala liberates the devotee (Smaranath Moksham Arunachala”. 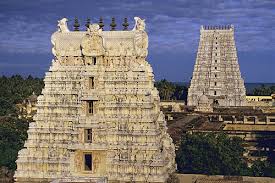