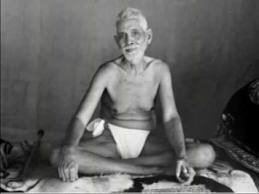 Apparently, it appeared they differed widely but the differences are only peripheral and not vital. In fact we find more areas where they agree and almost no area where they disagree. Their approach may have varied but their destination; liberation from the repeated cycle of life and death remained same. Strangely, it was the question of death that gave both of them the first step towards enlightenment. Distressed by the way his body and mind were leading him, Arunagiri decided to end his life and fallen from the temple tower of Arunachala. Surprisingly, he fell not on the ground but into the strong grip of two hands; the Abhaya Hasta of Lord Muruga. While Arunagirinathar had chosen death as a solution for his ills, Sri Ramana Maharshi started ruminating about death more seriously. He imagined himself to be dead and pondered over the question “Is this body represents ‘me’? ‘The material body may die but the spirit transcending it cannot be touched by death. “The body may be burnt and turned to ashes but the ‘I’ will not become extinct”, he realized. He then arrived at the conclusion that he is not the body; he is the deathless spirit, the indestructible conscious entity.

Appearing as Gurunatha, Lord Muruga rendered the saintly advice to Arunagirinathar. Arunagirinathar then emerged as an enlightened sage and rendered songs which were considered as the essence of Vedas and Upanishad. In Kandar Anubhuti, Arunagirinathar expresses this experience and appeals to Muruga to come as Guru (Guruvai Varuvai Arulvai Guhane). Similarly, Sri Ramana Maharshi went direct to Arunachala and surrendered before Him and Lord Arunachala has graced his ardent devotee and taught him that the path towards Self-Realisation is through introspection and Vichara.

“Give me your grace, your Arul”; this formed the refrain of almost all songs of Arunagirinathar. (Muktiye Servatharkku Arulvayee…song: Apakara Ninraipattu). Similarly, Maharshi says: “Divine grace is essential for Realisation. It leads one to God-realisation. But such grace is vouchsafed only to him who is a true devotee who has striven hard and ceaselessly towards the path to freedom” (Talks with Sri Ramana Maharshi No.29)

Arunagirinathar who was basically a devotee composed Kandar Anubhuti, a work on Jnana while Bhagavan, Ramana Maharshi who was basically a Jnani composed Akshara Mana Malai (The Marital Garland of Letters), an outstanding work of devotion. It is a divine coincidence that both Arunagirinathar and Ramana Maharshi stressed the importance of silence and used the same term “Summa Iru” (be still). Arunagirinathar recalls the saintly advice given by Lord Muruga thus: “What a wonder! The moment Lord appeared as a savior, he gave the advice; “be still” and there was no longer anything for me to know” (Summa iru Sol Ara Enralume…..Anubhuti). He says he knows no other means to realize God than the path of silence, solitude and stillness. Centuries later, Bhagavan Sri Ramana Maharshi expressed the same view point (‘Sollathu Solli Nee Sol Ara Nil Enru Summa Irundhai Arunachala’).
The term, “Summa Iru” (Remain quiet) is not to be interpreted to convey a state of idleness or inactivity. It does not mean refraining from talk. The term of silence referred by Arunagirinatha Swamigal and Ramana Maharshi is a state, where the mind and body becomes still and the “Self” alone shines forth. It is the state where the individual remains free from worldly thoughts and free from mental activity. Observing silence, looking inward and practicing ‘Siva Yoga’ paves the way for Self- realisation where the Jeevatma realises the eternal truth, Brahman, the self-guiding awareness, the supreme consciousness, which is present in all.

The human body is very fascinating, the centre of all activities, the motivating force behind all human assertions and possessions and the centre where concepts like ‘I’ and ‘mine’ arise, but the fact remains that this body is inert (jada). It cannot perceive. It changes every moment. It grows, decays and ultimately perishes. Ramana Maharshi said in categorical terms that ‘you are not the body, nor are you the mind. You are the Atman, the ever existing Self, the reflection of the eternal reality, Brahman. Strictly in accordance with his belief, Maharshi lived beyond his body and attained the state of Jeevan Mukti. Arunagirinathar also expressed the same view point in most of his songs. In one of his songs, (“Tholal Suvar Vaithu”), he says that this body, consisting of five senses and kosas (sheiths) is a house made of flesh, veins, skin and bones and one should free himself from the influence of such a body to be able to realize his inherent divinity (Atma Chaitanya).

Arunagirinathar was able to able to differentiate himself from his body and mind and some of the songs he addressed to the mind itself. He said: “Oh my friends, restrain your mind from going towards sense gratifications, eliminate anger and remain calm and quiet and composed. “ (Thadungol Manathai …Kandar Alamgaram 16). Bhagavan Sri Ramana Maharshi’s teachings always emphasized the need to transcend the mind and even eliminate it. He said mind is a mere bundle of thought. The only way the mind can be eliminated is by going to the source from where thoughts arise. Once you reach the root, the stem and branches would automatically fall.
Sri Ramana Maharshi said that though one cannot see himself as an object, he is aware that he exists. Though he sees the objects of the world through the aids of his senses, he is aware of his existence without any aid or help. He needs the help of his ears to listen, the help of his eyes to see and the help of his nose to smell but to know himself he need not depend on his senses or mind. One need not see a mirror to know that he exists. This consciousness that “I exist” is Self. The ‘Self’ is the eternal light, the ever existing reality. The Self, being self-luminous, is shining all the time and revealing its presence in all states of deep sleep, dream and waking. The Self constitutes the true identity of an individual but because of the super imposition of the body and mind; he is not able to realize his essential nature (Thaan) and remains under the mistaken notion of “I am the body”. (Yaan). In his immortal works, ‘Kandar Anubhutim Arunagirinathar says: “Oh Muruga, the source of all knowledge, what a grace that you have bestowed on me. The ego that characterized my individuality has been thoroughly overpowered. The false notion of “I” has disappeared completely in the effulgence of the Supreme Self. The ego self having subsided, I am elevated to a supreme state of awareness where my real Self alone remains (Yaan Akiya Ennai Vizhungi Verum Thaanai Nilai Ninrathu Tharparame). As the ego or individuality is swallowed by Arunachala, one is transcended from the realm of body or mind and reaches the state of Turiya where pure consciousness alone prevails. This is the state of Sath Chith Ananda (knowledge, consciousness and bliss) where one lives in his body and is yet independent of it. He becomes Jivan Mukta, free from Prarabda Karmas and liberated from the bondage of the world. He need not come again to this world of sufferings and sorrows. (Iha Chedskad Boddhum Prak Sarirasya Vistrasah tatah sargesu Lokesu Sriratvaya Kalpate (Kathopanishad VI-4).

In his song ‘Thenunthu Mukkanigal’ Arunagirinathar conveyed his prayer thus: “Oh Lord Muruga, bless me to transcend myself to a state where there is no ‘I’, no ego, no illusion, no attachment and the real, pure “I” remain in the vast space of emptiness in perfect harmony with Self.” In Akshara Mana Malai 91, we find the same state being mentioned. Maharshi says: “Oh Arunachala, come, we will go day and night, stay together in the vast expanse of the space, in perfect bliss. (Rappakal Illa Verum Veli Veetil Ramithiduvom Va Arunachala, Akshara Mana Malai 91)