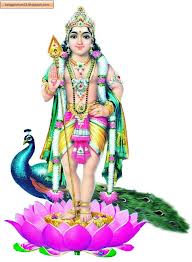 The journey of a devotee is always not smooth. It is almost similar to the experience of the devotee heading towards Palani during Thaipusam. When tired and exhausted after long hours of bare-foot walking, without food and shelter, he leans upon the shoulder of his companion who gives the strength to go forward. Similarly, the devotee who struggles through the road of life, feels the need for some companions and yearns for support. A school teacher asked the students what is the most important part of a human body. When one student said it is the pair of eyes, the other student said it is the pair of ears. Atlast, the teacher said that the most vital part of human body is the shoulder because while in distress, one looks upon the shoulder of the other to lean upon, to get strength, support and consolation. It is the shoulder a woman leans upon when she feels the need for solace and comfort. A human shoulder may not always be available or accessible. The human shoulder may not always give everlasting support. The shoulder that is ever accessible, ever-lasting and gives hope, confidence and courage is that of Lord Muruga. That is why; Arunagirinathar has sought the support of Muruga’s shoulders in almost all his songs.

Normally, the individual would be walking with some companions, but there comes an occasion when he has to walk alone through a dark corridor towards his final destination. That is the time, he needs some good support and courage. Arunagirinathar says that in such an event, the shoulders of Muruga alone gives him support and reassure him that there is nothing to fear. (Avan Panniru Tholum, naan bayantha thani vazhikku thunai……’Vizhikku Thunai’, Kandar Alamgaram). In another song, Arunagirinathar says: “What harm the planetary movements or evil effects do me when I have the grace of Muruga and his shoulders to support me?” (Tholum Kadambum enakku munne vandhu…Naal En Seyyum). When Arunagirinathar stood before Vayalur Muruga wondering how he would compose, Thiruppugazh, he heard the command of the God thus: “Sing about me, about my Vel and about my shoulder” (chitradiyu mutriyapa niruthoLum). In another song Arunagirinathar says “Before the messengers of Lord of Death arrives, Oh Muruga, appear before me, your broad shoulders adorned by colourful garlands) (soodu tholun thadan thirumaarbum…Kaalanar). The concluding song of all bhajans, describe the six sacred faces of Muruga, his lance (vel), the peacock, the rooster, Vel, his consorts, Deivayanai and Valli and his l devotees, but the first mention is made about the shoulders of Muruga. (Aru Iru Thadanthol Vazhga, Arumugam Vazhga Verpai, Koorusai…..). In another song, Arunagirinathar says: “I worship the courageous leader, Muruga, having 12 shoulders who courted Valli. (”Pattoru soor maaLa vikrama velevu, paththiru thoL veera thinai kaaval”….Suttathupol).

With the strength, courage and support given by the shoulders of Muruga, the devotee reaches his ultimate destination, the Lotus Feet of Muruga, the sacred feets which liberates him from the cycle of life and death. Most of Thiruppugazh songs end up with the prayer to reach the Lotus Feet of Muruga. When Arunagirinathar got the vision of Lord Muruga, as Gurunatha, what he first saw was the Thiruvadi, the sacred feet. He mentions this experience thus: “I was delighted beyond words when I saw your sacred feet, adorned with anklets like tandai and silambu, your lance which pierced through the Krauncha hill, your broad shoulders adorned with kadambu flowers, your six sacred faces and flower-like eyes (Thiruvadiyum Thandayum …Kandar Alamgaram 102).

“I have been wasting my days by studying books and literature and by roaming around the world begging. When the day would dawn I would seek the real knowledge that would lead me to your Lotus Feet” says Arunagiri in his song ‘Porppadhathinai’, done at Thiruthanigai. He specifies the different items which he has to offer to Lord Ganesa in order to reach his Lotus feet. (‘Ninathu thiruvati sathimayirkodi’, ‘Naveru paamanatha paadharame ninaithu). Arunagirinathar waxes eloquence about the greatness of Sacret Feet in his Seerpadha Vakuppu. In one of his songs, Arunagirinathar says: “What Vedas earnestly search for is your Lotus Feet, the sound that your Lotus Feet emanate is the Pranava Mantra, OM, what radiates above, in the vast infinite space is the vision of your Lotus Feet” (Olamaraikal Araikindra…Thiruvanaikka)

A question arises what exactly the term ‘reaching the Lotus Feet’ mean and how one who is actively engaged in the worldly duties could attain that end? To reach the Lotus Feet of Muruga means to surrender to God totally. Surrender means renouncing whatever that one possesses. It also means renouncing the possessor. Surrender simply means surrendering the ‘I”, the ego. If the ‘I’ is given up, everything is given up because ‘I’ is the very source from where all the desires and passions originate. By surrender, the devil called desire goes and the difference of ‘yours’ and ‘mine’ disappear. Surrender is the ideal form of Bhakti Yoga by which the devotee always abides by the will of God and leaves the question of his protection to God. A true devotee does not merely offer obeisance to God. He offers himself to God without retaining any part of individuality for himself. He entrusts his entire life, his aspirations, his obligations, his possessions etc. to God.

How will it be possible? Sri Manickavachagar said that the devotee would be able to seek the Lotus Feet of God only by the grace of God. (Avan Arulale Avan Thaal Vanangi). Grace means a divine power which automatically operates when devotion springs forth in heart. When the individual seeks God with devotion, the grace follows. It cannot be explained in words but only experienced. Almost all the songs of Arunagirinathar end up with the word “Arulvaye”. It is the grace, the ‘Arul’ or ‘Krupai’ by which we are able to move forward. In the song ‘Ainkaranai yothamanam” every line of the song ends with the word “Arulvaye”. Grace me with a mind by which I worship you with love”, he sings. (Unai anbodu thudikka manam arulvaye”) . In the song ‘Sivanar Manam Kulira’, Arunagirinathar asks for grace coupled with Jnana. (Arul Jnana Inbamathu purivaye). How to obtain the grace with Jnana?