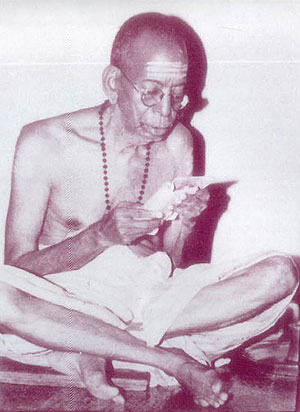 It was sometime in 1871. The Cuddalore District Court was hearing a petition on who qualifies to perform Puja at Chidambaram Temple. The existing priests themselves were arguing their case. They said the practice was originally entrusted to the priest community (Dikshitars) whose only profession was to carry out Puja at temples by following certain tradition, norms and principles. These priests were carrying the traditional practice for many years with discipline. In order to substantiate their argument, they quoted a line from Thiruppugazh which gave clear indication that only those Brahmins who have been following the norms prescribed in Vedas could carry out the Puja in the particular manner prescribed. (Veda noon murai vazhuvame dhinam, velviyal ezhil punai moovayira, menmai vediyar mikave poosanai purikove).

The song made an enormous impression on Vadakkupattu Subramanyan, the Writer in the Court. He found some inherent power within the song. “This song could not have been composed by a human. There is a divinity behind this song”, he said to himself. After the Court dispersed, he went up to the priests and asked them what this song was and who composed them. The priests explained that this song which begins as ‘Dathu mamalar mudiyale’ was rendered by Sri Arunagirinathar, the author of Thiruppugazh, while he visited the temple of Chidambaram. Subramaniam who was an ardent devotee of Tiruthani Muruga now found a medium to reach his Lord. He then decided to dedicate himself to Thiruppugazh form of worship.

A magnificent work such as Thiruppugazh was not fully known to the world at that time. The songs were lying in manuscript form in some dark corners of the world, unrecognized and unsung. Can a work like Thiruppugazh which was composed by the blessings of Lord Muruga remain unnoticed? Can the devotees be deprived of the nectar of Thiruppugazh that would liberate them from the world of illusion? It cannot be. The power in Thiruppugazh is so great that it reveals itself at the appropriate time, to be rendered, to be heard and to be experienced. Then, by a divine intervention, the glory of Thiruppugazh was revealed to Sri Subramaniam. He then made it his mission to locate Thiruppugazh songs which were lying scattered at different places in manuscript form and succeeded in his mission to a great extent. After his demise, his son, Sri Chengalvarayan carried the work forward and obtained more songs and brought out a collection of Thiruppugazh songs including Kandar Anubhuti, Alamgaram, and Vakuppu. It is this work that serves as the basic source for all the subsequent works on Arunagirinathar and his compositions. Chengalvarayan did extensive research on Thiruppugazh and brought out an outstanding work, “Arunagirinathar Varalarum, Nool Araichiyum” (Life history of Sri Arunagirinathar and research study on his works). But for the sincere efforts taken by Sri Chengalvarayan, Muruga devotees would not have blessed with an effective form of worship like Thiruppugazh.