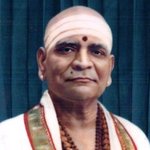 A judge residing at Mylapore was too pre-occupied with his legal profession. Like a true Karma Yogi, he was always engaged in doing  the work assigned to him.  Even while at home, he would be studying the papers and preparing for the next day’s session. Then, a friend called at his residence and made a suggestion.  “Why not have a Thiruppugazh Recital at your house.” That was the time when Vallimalai Sri Sachidananda Swamigal was creating a Thiruppugazh wave in and around Chennai. The Judge, who was just curious to know what Thiruppugazh is all about, agreed.  As Vallimalai Sri Sachidananda Swamigal stepped into his house and started the Thiruppugazh recital, the whole atmosphere was surcharged with devotion. At the prompting of Swamigal, the judge started singing by seeing the Thiruppugazh book. That marked his initiation into Thiruppugazh form of worship. Then, Thiruppugazh became his primary profession and the legal profession, the next. The Judge who rendered the first song being initiated by Sri Sachidananda Swamigal and went on singing at many places like temple, houses, halls and even in streets, was Sri T.M. Krishnaswamy Iyer, popularly known as ‘Thiruppugazh Mani Iyer’.

An Advocate of high repute, Sri Krishnaswamy Iyer was respected for the principles and values he held close to his heart. Having heard about his qualities, his dedication and adherence to truth, Diwan of Travancore, Sir C.P. Ramaswamy Iyer requested him to take charge as Chief Justice in the Travancore Court which he accepted. In 1947, the year India attained independence, he returned to Madras to continue his service in the Court. He soon rose to the level of Chief Justice of the Madras High Court. He retired from service in the year 1963. His portrait was unveiled at the hall of the Advocates’ Association by Justice Sri Pathanjali Sastri of Supreme Court. Later his portrait was also unveiled at the hall of the Madras High Court.

That was only one side of the coin; the professional side. The other side was his devotion towards Muruga, his deep involvement in Thiruppugazh and commitment to tread the path of truth. Blessed with a heart full of devotion and endowed with a voice that is captivating, he became a strong Thiruppugazh exponent. He created awareness in Thiruppugazh by organizing regular Thiruppugazh Recital at Sri Muthukumara Swamy temple at Kandakottam, Chennai. ‘Adiyar Thirukoottam’, as it was called, happened to be a prime religious event in Madras in early 50s which attracted devotees from far and near, the Satsang which this writer had the opportunity to participate. An active disciple of Sri Sachidananda Swamigal, Sri Krishna Swamy Iyer joined the Vallimalai Swamigal in initiating the practice of Padi Vizha at Tiruttani.

A frequent visitor to Jagatguru Sri Chandrasekhara Bharathi of Sringeri Mutt, Sri Krishnaswamy Iyer also met Sri Ramana Maharshi at Tiruvannamalai. He described his experience thus: “I first saw the slim figure of a yogi who seemed to be the flame of a candle. The candle has now grown into Sri Ramanasramam. The flame is still there as it was. The paradox is that the flame feeds the candle and not the candle the flame. The message of peace and love, of meditation and realization and of service and universalism has a great value. Sri Ramanasramam which gives this message is an oasis in the desert of the modern world.” Rajaji described Sri Iyer as “A Sanyasin in white garment”. The saint Sivanandar gave him the title of “Thiruppugazh Jyothi”. A few days after he performed Bhajan at a draught affected area, the whole town witnessed continuous downpour. Then on, invitations started pouring in from different places for the performance of his Bhajan. It has been recorded in various publications that following his Bhajan the draught affected areas received good rainfall. He performed at Tiruttani, Tiruvannamalai, Salem and Valajabad and at all such places he prayed for the welfare of humanity and for all round prosperity.

In the year 1964 his “Sadhabhishekam” was conducted in Madras in a very grand scale. Eminent personalities from the legal profession, luminaries from the world of music like Smt. M.S. Subhalakshmi and many devotees turned up to greet him. When a giant garland was put on him, he saw his gardener standing in a corner, beckoned him near and honoured him with that garland. Even in his advanced age of 80, he used to perform bhajan at different places. He gave new impetus to Thiruppugazh way of worship. “A person singing Thiruppugazh with implicit devotion and without any expectations would surely experience the grace of the Lord. It is better to leave our aspirations to God because quite often we ourselves do not know what is best for us,” he said.

Among the many places he visited, Palakkad needs special mention. It happened sometime in 1927. During his visit here, he learned that Sri Chandrasekharendra Saraswati Swamigal of Kanchi Kamakoti Mutt was camping at Pallavur village. He rushed there with his team and paid obeisance to Paramacharya. Paramacharya then expressed a wish to hear Thiruppugazh. It was a great privilege to render Thiruppugazh before Maha Swamigal and Sri Krishnaswamy Iyer and team rendered Thiruppugazh while Maha Swamigal lent his ears attentively. The pleased Acharya bestowed a Kashmiri shawl on him and also the title of “Thirupugazh Mani”, matching with his initial ‘T.M’. With the blessings received from Maha Periyaval, ‘Thiruppugazh Mani’ Krishnaswamy Iyer proceeded to Coimbatore and met Sringeri Acharya camping there. When Krishnaswamy Iyer stated that he has been conferred with the title of “Thiruppugazh Mani” by Paramacharya, Sringeri Acharya said: “Take it that both of us have given the title jointly”.