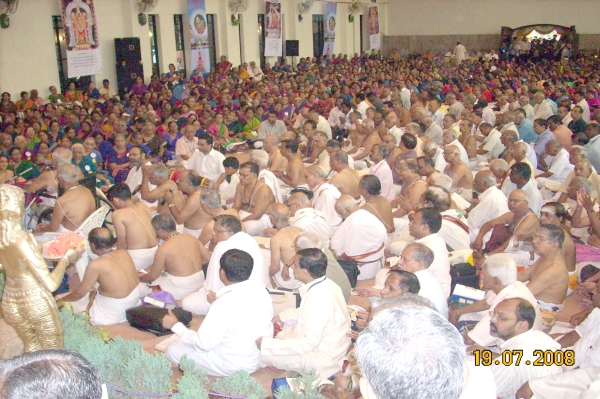 The Thiruppugazh wave created by Guruji swept across the nation and abroad. His disciples and followers have increased multi-fold. Those who learned direct from Guruji carried the Thiruppugazh tradition forward. Those who moved over to other places started conducting classes and recitals from where they settled. The Thiruppugazh carried a unique divine power which attracted the devotees from all over India and abroad. On great occasions like Anniversary or Guru Samarpana Vizha, they come in large number to listen, to learn and experience the nectar of Thiruppugazh that flows from Guru. Though the human mind differentiates them by gender, by age, by class or place, the love that springs forth from their heart unites them all. Guruji said that love is already there; bring it forth and give it generously. It was Guruji who united them all with the term ‘Thiruppugazh Anbargal’.

Arunagirinathar gives us the message that only through the path of love; one can reach the Lotus Feet of God. (Anbaka Vandhu Un thaal panindhu….Tiruchengodu}. In another song, Arunagirinathar prays “Give me a mind by which I worship you with love”. (Anbodu thuthikka manam arulvaye….ainkaranai otha manam). In another song done at Virinjipuram, Arunagirinathar says: “Oh! Muruga, when I do not think of you with love, how I can hope to reach you” (Uruki anbinodu unai ninainthu….”Maruvum anju pootham”). Guruji was also a symbol of love and he appropriately named all those who sing and follow the Thiruppugazh way of life as “Thiruppugazh Anbargal”. It is the love kindled in the heart that unites them all. Whatever identifications by which they go, they are all bound by the common bond of love. “Devotion towards Muruga and love towards all”; that seems to be their aim.

A true Thiruppugazh Anbar can be defined as one whose mind is without any thought other than Muruga, whose heart is filled with pure love, whose tongue recites the names of Lord Siva, Muruga or Narayana and whose ears are receptive to the songs of devotion and words of truth. We have a great tradition of respecting the linage of Gurus with Lord Sadasiva at the top, Adi Sankara in the middle and continuing the culture with our immediate teacher. (Sadasiva Samarambham Sankaracharya Madhyamam Asmad Acharya Paryantham Vande Guru Parambaram). The Thiruppugazh Anbargal followed this tradition with great dedication. They regard the Guru who teaches them Thiruppugazh with reverence. They learn from Guru not just the Raaga or Tala of the song. They also learn the value of love, the importance of Satsang, the significance of unity, the need for humility and above all the pure and perfect path of truth. Though there are many Anbargal who are all equal in their devotion and who are dedicated to the cause of Thiruppugazh, we illustrate the story of just two disciples selected at random.

“Please come, spend some time with your grand-children who are craving for your love”. Most of the parents would have received such a request from their son or daughter settled overseas. When the lady who was an ardent disciple of Guruji Sri Raghavan received this request from her son, she could not say “yes” or “no”. If she said “yes”, she would be denying herself the bliss of attending Guruji’s classes and if she said “no”, she would be denying the pleasure of the company of her grand children. When she expressed her predicament, Guruji advised her to say “yes”. “Go, but carry the Thiruppugazh tradition with you” Guruji had said. She then boarded the flight for Canada on 22nd January 1982 wondering how to go about her task of planting the Thiruppugazh tree in a distant, foreign and unknown soil. Then one day, while resting at the residence of her son, the telephone rang. It was Santha Krishnamurthy at the other end. She said she and her friends are very keen to learn Thiruppugazh and enquired whether this lady would help them out. Her joy knew no bounds and soon a teaching session with just four students was started. From four it became forty and many. From one place, it travelled to different places. The tree became giant in size, spreading its branches all over Canada and America. What Arunagirinathar visualized about Thiruppugazh being hailed as a wonder by people of North, South, West and Eastern region (Pachima dakshina uthara dhikula…‘Bhaththar Ganapriya’.) was now coming to reality. These devotees performed at York University, watched and listened by vast audience, consisting of different nationals. The students were singing and more students came to learn. She was delighted when Guruji accepted her invitation and came to Canada. All those who witnessed Guruji’s Thiruppugazh on the auspicious day of Kirthigai the next day experienced the presence of Muruga and returned with a great sense of spiritual fulfilment. The glorious journey of Guruji culminated on the day of Vykasi Visakam. The lady, who by virtue of her devotion to Guruji could single-handedly organize a mass Thiruppugazh movement abroad, was Smt. Thara Krishnan. She attained the lotus feet of Muruga on 23rd June 2017.

Lalita Nagaraj hailed from a musical family. Her father, a great admirer of the veteran musician and actor, S.G. Kittappa, renamed himself as Kittappa. While her husband, Nagaraj deftly handled Ginjara, her son, Manoj is a good Mridamgam player. Just as any devotional singer, Lalita Nagaraj was also attracted to Guruji Sri A.S. Raghavan and received direct training in Thiruppugazh. As she settled down in Coimbatore later, she has chosen this city as the ideal ground to express her Thiruppugazh passion. She was very particular in singing Thiruppugazh in the Raaga and Thala which Guruji has prescribed. Whenever an Anbar approached her with a request to conduct the Thiruppugazh recital at his house, Smt. Lalita readily turned up at the premises at the time specified with all her group members like Sruti, Jaya, Kamala, Kalyani etc. It is a strange coincidence that her group members’ name also sounded music. The voice of Lalita Nagraj was heard at many residences, Sabhas, temples and halls, the voice that hailed the glory of Lord Muruga in the divine verses of Thiruppugazh. She was a born Thiruppugazh singer. Just mention the first few words of a Thiruppugazh song to her and she would give all details about it; its Raaga, Thaala, the place from which Arunagirinathar rendered it, the song number by which it appears in the old book and the new book and also the meaning. “It is very rare to see a Thiruppuhgazh singer who is as humble, as sincere and as dedicated as Smt. Lalita Nagaraj,” said Sri N.V. Vaidyanathan, who conducts classes at different places in Coimbatore on all the seven days of the week. ‘She was a role model of the principles of Anbu and Avirodha as set out by Guruji for Anbargal’, said Sri Gopal, her disciple. During December 2012, while conducting class, Smt. Lalita suddenly received a stroke. After being in hospital for few days, she bid farewell to this world to rest permanently at the Lotus Feet of Lord Muruga.

There are many Thara Krishnans and many Lalitas who come under the spell of Thiruppugazh.  There are devotees spread in different parts of the country, some not familiar with Tamil language and not able to grasp the meaning of the song and yet they form themselves into a group and start learning Thiruppugazh which goes to show that there is some inherent power in Thiruppugazh which attract them and unite them all.  They eagerly come and participate in Thiruppugazh class or recitals not for any gain and not for any material benefits but for the inexplicable sense of fulfillment the Thiruppugazh songs give them.  They are noted mainly for their two qualities; devotion towards Lord Muruga and love towards all.  Guruji has described them in two beautiful words: “Thiruppugazh Anbargal”. 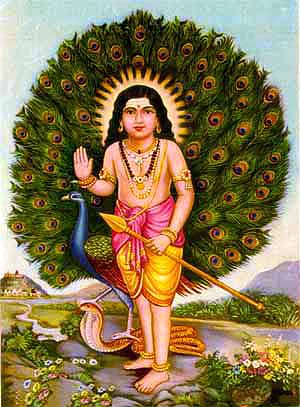