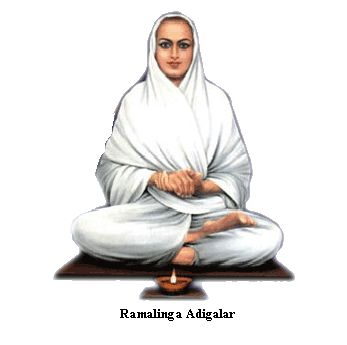 Sri Ramalinga Adigalar, popularly known as Arut Prakasa Vallalar, was a visionary, a divine personality, an erudite scholar, a philosopher, a social reformer and above all a human with a heart full of compassion and love. He was a visionary because he visualized a world without borders; a world without distinctions and differences. He was a divine personality because he experienced God within himself and saw himself as a messenger of God who has come to earth to uplift humanity. He was a scholar because his works, ‘Thiruarutpa’, the songs of magnificent verses set the standard for a life of perfection and truth. It is a treasure that contains pearls of wisdom. It is the pathway to ultimate liberation. He was a philosopher because he brought about a new doctrine, beyond religions, where the God is perceived not in any form or image but in the form of Jyoti which radiates all over the universe and within. He was a social reformer because he dispelled many wrong notions that prevailed in the society and awakened the consciousness of the people. He was a perfect human because he considered service to humanity as service to God. He took various initiatives with the objective of wiping out the tears from the face of the suffering humanity and bringing everlasting cheers in their faces. For the first time, the human value was highlighted over religious values. Adigalar’s theory brought about a spiritual renaissance in the society. The principles of Sudha Sanmargam were in harmony with that of Saiva Sidhantam, though the path of Sanmarga went beyond the usual form of worship and adopted a more universal method of Jyothi worship.

Ramalingam was born to Ramayya Pillai and Sinnammai couple in village, Marudhur, near Chidambaram in 1823. Ramalingam showed extra ordinary wisdom at a very young age. After the demise of the father, Sabapathi, the elder son took the responsibility of bringing up Ramalingam. But Ramalingam did not evince interest in academic studies. When Ramalingam was sent to a learned Pundit at Kancheepuram for learning, after a brief inter-action with Ramalingam, the Pundit sent back Ramlingam with the message that there was nothing that he could teach a person like Ramalingar who was capable of teaching the whole world.

After the demise of Ramayya Pillai, the family shifted to Madras. Ramalingam then started visiting the Kanda Kottam Muruga temple. Visit to this temple became a daily routine for him. Looking at the shrine of Muruga at Kanda Kottam, Ramalingar felt intensely emotional and poured out his devotion in the form of ‘Deiva Mani Malai’. “You are the embodiment of love, who has no equal, who is enlightened, who gives happiness to all. When would the rose petals of your Lotus Feet extend their gentle grace to my heart? When would you come, mounted on your beautiful transport of peacock to give me the treasure of your grace?” So went the lines of Deiva Mani Malai which he composed at the age of nine.

Ramalingar spent most of his time in his room. Sitting before a mirror, he used to mediate and compose poems. As he meditated, his individual self had disappeared and the Lord he had realized within had revealed himself in the reflection on the mirror. He sought to see the reflection of the Lord within his heart into the mirror in front. Generally devotees sought God outside, in the idol of a temple or a symbolic picture and then realize His presence within. Here, in sharp contrast, Ramalinga Adigal was seeking the outside reflection of the God who was already being experienced within. Enlightened within, he composed songs invoking the Grace of Muruga, like Kandar Sarana Pathu, Shanmugar Kalaipattu and Deiva Mani Malai etc.

Arut Prakasa Vallalar, as he has come to be known, gave expression to his devotion through songs. He composed many verses of poems and the foremost among them was ‘Thiruvarutpa’. A collection of 5818 poems and divided into 6 volumes, Thiruvarutpa is considered as an outstanding work of literature and devotion. This sacred collection of songs portrays the eternal concept of truth, the general aspects of life and his own divine experience.

His Philosophy – God, the supreme power, has no particular form. He is present everywhere. He radiates his light of radiance all over. Vallalar therefore saw God through the light of Jyoti. In his Jyoti Agaval, Vallalar describes the four manifestations of Jyoti; Suyam Jyoti, Param Jyoti, Arul Jyoti and Siva Jyoti. It is the Atman, the Self that reveals as Suyam Jyoti. Param Jyoti denotes the Vast Grace Light prevalent throughout the universe. Arut Jyoti pertains to the Divine Light that is inherent in the entire space and expressed by way of grace. The infinite power of Siva is expressed in the form of Siva Jyoti. As the Atma Jyoti shined within, Vallalar received the Upadesa (saintly advice) of the mantra that would illuminate the world; Arut Perum Jyoti, Arut Perum Jyoti, Thanip Perum Karunai Arut Perum Jyoti. Vallalar said: “The Vast Grace Light is eternally shining in my heart. It shines on its divine law of truth and deriving its infinite power I have become immortal.” He then conveyed the mantra to all his disciples with request to pass it on to all for the benefit of entire humanity 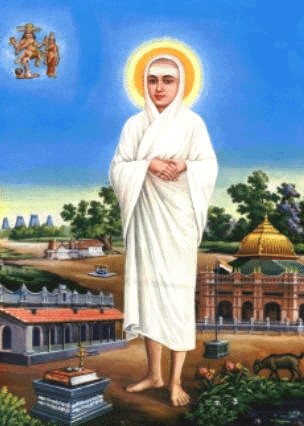 Jeeva Karunya Ozhukkam -Vallalar was the embodiment of compassion. In one of his songs, he said: “My life and compassion are one, If compassion departs from my heart, my life too departs”. Vallalar believed in the dignity of man and emphasized that religions should respect this dignity. According to him, service to humanity is service to God. When he saw people suffering for want of food, it reminded him of falling young plants drying up for want of nourishment. He expressed this feeling in one of his songs thus: “I felt sad seeing the falling ear of tender plants, withering for want of nourishment. I felt sad like seeing frail people yearning for food.” (“Vaadiya Payirinai Kanda Pothellam Vaadinen”). Vallalar underlined certain principles which he called Suddha Sanmarga. These are:

Vallalar perceived God not as an identifiable image, not necessarily in the form of an idol and not restricted to a class or region. He perceived God as all-pervading divine power. He pointed out the lacuna in the prevailing practices and sought to dispel many ill-conceived notions. He sought to dispense with various practices like rituals. He sought to remove the artificial barriers and unite all aspirants under one common platform.

His philosophy made profound impact on the people.He led a life of virtue, abstinence and discipline. He prayed for all people, accepting their vices as his own. He always wore spotless clean white cloth around his body that symbolized gentleness and peace. He looked serene and majestic, his sparkling eyes conveying the message of love. He spoke in a low gentle tone. Even while singing, he maintained a low pitch. One heard his voice raised only while he spoke against the practice of non-veg. He performed many acts of miracles but never agreed that he consciously exercised such powers or even possessed them. He not only fulfilled the aspiration of the soul but also healed the body. He was a good physician who prescribed clean diet habits, exercise, Pranayamam and Yoga for good health.

Dematerialization: Vallalar believed that just as the soul, body also undergoes a spiritual transformation by the grace of Jyothi. When the body functions independently of sense organs, it becomes pure. When the soul within is sublime and sacred, it implies that the body in which the soul lives is also pure. Just as the contents are pure, the container also gets purity and sanctity. As a result of spiritual transformation, the body assumes a stage of divine Golden Deathless Body. It continues to remain in this divine stage deriving its own inherent energy and attains immortality.

Vallalar is believed to have attained immortality. On 30th January 1874, Vallalar drew some of his close disciples near and said: “I wish to confine myself in the room here. Do not search for me and if you do, you would not find. I believe, God has willed it that way and I hope it would happen that way”. He then walked away, entered into a room and closed the door. It is believed that he sacrificed his deathless body and dematerialized so that he could continue his divine presence among his disciples, grace them and guide them.

Vallalar conjured up vision of a new world order where there will be no difference of region or religion, caste or creed and humanity will be bound by the spirit of love and goodwill.May the light of love, the light of grace he kindled radiate its brilliance all over. May the beacon light he lit brighten up the world. May the flame of grace he brought bring a sense of unity and peace all over the earth.