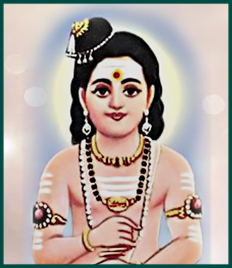 The Saiva Sidhantam speaks of Siva as the ultimate Truth, Siva as the source of all beings and Siva as the ultimate end of liberation. Arunagirinathar did not see Muruga as separate from Siva. In many of his songs, Arunagirinathar refers to Muruga as symbolizing Siva and he does not distinguish between the two. In his song, ‘Akalvinai’ Arunagirinathar views Siva manifesting all over Palani (Sivamayamai Nin Pazhani Thanil). In Velaikkaran Vakuppu, he refers to Muruga as ‘Mugamayakkaran”, the magician who changes face. Here, he was indicating that the five-faced Siva has taken the form of six-faced Muruga.

In one of his song Arunagirinathar addresses Siva thus: “Oh Lord, who renders the advice as Guru, who manifests all over the vast space of the universe, who symbolizes the eternal reality, who forms the five fundamental elements of Panchabootha, who is the embodiment of beauty, who destroys the evil elements, who dances at the golden temple of Chidambaram, you are the eternal Gurunatha for the entire human race” (Parama Gurunatha Karunai Upadesa ….song No.511). Here, Arunagirinathar was seeing Siva as the one reality and Muruga as the manifestation of that one reality. The influence of Saiva Siddhantam is glaringly evident in almost all the songs of Arunagirinathar. In his song “Ulaka Pasu Pasa Thondam Adhuvana”, Arunagirinathar says: “Let not my mind get disturbed by worldly relations and attachment. Grant me a steadiness that I ever remain firm in my devotion”. In another song, starting with ‘Vachanamika Vetri’, Arunagirinathar  says: “Oh Lord who forms the founding principles of Pathi and Pasu, who has his abode at Palani and who has rescued the Devas, I worship you (Pasu Pathisivakyam Unarvone, Pazhanimalai Veetralumvela). Arunagirinathar derived great inspiration from the works of Saiva Sidhantam like Thevaram and Thiruvachakam. In the song “Seetha Vaasanai” Arunaginatha Swamigal has portrayed how Lord Siva stood by His devotee, Maanikkavachakar and blessed him to compose the great works, Thiruvachakam.

Arunagirinathar was particularly attracted towards Thiru Jnana Sambhandar.  Even at his tender age, Sambhandar was transformed into a scholar of repute. Mounted on the shoulder of his father, he started his journey to places of spiritual importance and as he grew up, he continued his pilgrimage on foot, singing the praises of Lord Siva. Sambhandar is considered as foremost among the 63 Saivite saints.  Adi Sankara described Jnana Sambhandar as a Dravida Sisu. Sekkeezhar’s Periyapuranam which is considered as the first volume of Thirumurai provide us great insight into the life and teachings of Thiru Jnana Sambhandar.

Of all the great Saivite saints, Thiru Jnana sambhandar made a profound impact on Arunairinathar. Though the Chandam formula was prevalent before, it was Thiru Jnana Sambhandar who adopted it in large scale in his songs. Every song has a time measure, commonly known as Tala and arranging or grouping the time measure minutely in accordance with the meter or length of the song is called Chandam. Following the foot-steps of Sambhandar, Arunagirinathar too adopted the Chandam mode very successfully in Thiruppugazh. Following the example shown by Sambhandar, Arunagirinathar too went on a great pilgrimage and visited different temples.

Siva, the manifestation of the one supreme power, the Brahman,
and ever present in the word ‘OM’,
has become two with the combination of Sakti.
The five faced Siva symbolizing Panchakshara Mantra
has appeared as Muruga with six majestic faces,
signifying the Sadakshara Mantra.

Oh Muruga, who imprisoned Brahma, the Lord of Creation,
and released the Lord at the request of Hari, Haran and Indira,
Muruga, who circumambulated the world in a second,
who married Devasenai, the daughter of Indira,
reigned as the younger brother of Lord Ganesa,
acted as the Guru for Lord Shiva, the destroyer of Karma vinai,
Muruga who appeared as Sambhandar in Sirkazhi
who was fostered by Karthigai maidens,
who holds the spear that dcestroyed the Krownja mountain
who is worshipped as Kumaraya Nama by saints,
who appeared as the ever effulgent God in Thiruverakam,
.and came to be known as Erakathiraivan,
I worship Thee”

Arunagirinathar believed that Jnana Sambhandar was the incarnation of Lord Muruga. In his song “Karuvin Uruvagi”, Arunagirinathar addresses Muruga as one who has appeared in Pugaliyur. Here, he is referring only to Jnana sambhandar who has taken birth at Pugaliyur. The various instances like mother Parvathi nursing Jnana Sambhandar while he was a young baby, the saint performing many acts of miracles and appearing as the embodiment of Jnana (knowledge) lends credence to the theory that Lord Muruga himself manifested as Sambhandar to highlight the glory of his father, Lord Siva. There is also a belief that Lord Siva, pleased with the songs of praise rendered by Muruga as Sambandar decided to return the compliments and manifested as Arunagirinathar and rendered songs in praise of Lord Muruga.

Though different interpretations are given, it can be concluded that both Thiru Jnana Sambhandar and Ariunagirinathar subscribed to the belief that Siva and Muruga are one and the same. Muruga is an extension of Siva and when Siva, the Lord of Kailash was receiving advice from Muruga, the Lord of Swamimalai, Siva was receiving advice from his own Self which reflected as Muruga. It is therefore clearly evident that the five-letter Mantra (Namasivaya) and the six-letter word (Saravanabhava) are one and the same.

There is only one eternal reality, the Brahman, the all pervading, the infinite, the ever existing supreme power, the power that manifests all over the universe, the power that reflects as the Atman within the self and in all others. It is this concept Arunagirinathar explains in Kadaikkan Vakuppu: “Iruvar Avar Ninridathum Evarevar Irunthidathum Oruvan Ivan Enru Unarchi Koodalam”. 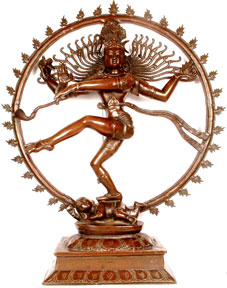